An optometrist has won praise after the life-saving referral of a young patient who turned out to have a brain tumour.
Practitioner Anna Lewin was called into action in October last year, when 23-year-old patient Amber Carter was advised by her GP to book an eye appointment because she had felt unwell for several months. Symptoms had included sickness and headaches. 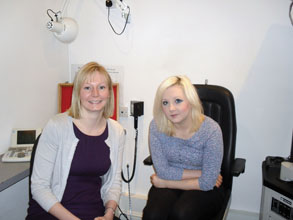 Following the eye examination, at Haine & Smith Opticians Chippenham, Lewin detected that the optic nerves of both the patient's eyes appeared swollen and referred her straight to Royal United Hospital in Bath.
The following day she had a nine-hour operation at Frenchay Hospital Bristol to remove a benign tumour that was described as being the size of an orange.
Although the tumour was not found to be cancerous, the patient developed right-sided weakness following the surgery and is now having physiotherapy three times a week.
'If I hadn't gone to the opticians to be honest I probably wouldn't be here now so I'm really grateful,' she said.
Lewin, who has been with Haine & Smith for 10 years, said she knew the swollen optic nerve could potentially have been caused by a number of other conditions.
'I knew there was a chance it was a tumour but hoped it wasn't,' she said. 'You do see swelling of the optic nerves occasionally and while often there is another explanation, you also know there's a chance of it being a tumour which is why I referred Amber so quickly.'
She added that 'it could've been catastrophic' had the tumour gone undetected any longer.