Scientists say they have invented spectacle lenses that cure red-green colour blindness, which affects some women and one in every 10 men.


The Oxy-Iso lenses were designed by an American research institute to allow medics to spot bruising and veins that are difficult to see. 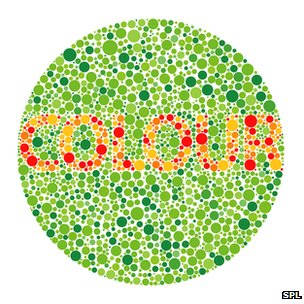 Tests suggest they can help to enhance reds and greens in the colour-blind.
But they could not be worn by drivers, because they reduce the ability to perceive yellows and blues.
Theoretical neurobiologist Mark Changizi, who developed the glasses with Oxy-Iso lenses, believes human colour vision "evolved above and beyond that found in other mammals... allowing us to sense colour-signals on the skin, including blushes, blanches, as well as sensing health".
"So the Oxy-Iso filter concentrates its enhancement exactly where red-green colour-blind folk are deficient," he said.
Daniel Bor, a colour-blind neuroscientist at the Sackler Centre for Consciousness Science at the University of Sussex, said they made red colours appear very vibrant.
But he had some reservations, because they also made yellow light invisible.
"My daughter's baby monitor has some yellow lights on it and I couldn't see them at all," he said.