A new trail compares drops and laser-based treatment could have a huge impact on how we manage the disease.
A milestone study has opened up new possibilities for managing the disease. 80% of patients respond as well as they would to the eye drop PGA and if the laser treatment wears off over time it can be repeated. It takes 10 minutes in an outpatient setting, using a YAG laser and side effects are most uncommon.
Research from Moorfields Eye Hospital and UCL Institute of Ophthalmology showed using SLT, selective laser trabeculoplasty on newly diagnosed patients was more successful and cost effective, than the current method of drops. SLT has become an established treatment for glaucoma but due to the lack in evidence and perception of the laser, has not yet been widely adopted. 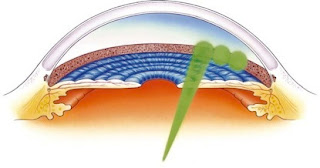 The studies main question was ‘Should SLT be used first line?’ The answer was a resounding yes. SLT is safe and more effective as a first line, with drops later as needed. 93% of patients met their pressure target at 3 years, with 72% not requiring any drops at all.

The LiGHT trail, one of the biggest of its kind assigned one of the two treatments to each patient; either the traditional eye drops or the quick, painless laser which disrupts the blockage. SLT was first introduced in 1995 and become a recognised replacement for argon laser trabeculoplasty (ALT). Though both are effective and safe SLT is safer and more repeatable

‘Eyes of patients in the SLT group were within target intraocular pressure at more visits by 93% than those in the eye drops group at 91%, with glaucoma surgery to lower intraocular pressure required in none versus 11 patients,’ in a report funded by the National Institute for Health Research.
SLT has now been recommended as the first-line of treatment for open angle glaucoma and ocular hypertension. 600,000 people in the UK are living with glaucoma and with an aging population, Glaucoma Research Foundation have said it expects rates of the disease to increase in the coming decades.
Researches await the NHS to clinically endorse the laser as first-line which could be life-changing for glaucoma patients. Currently the eye drops work to lower pressure in the eye by increasing the fluid outflow and reducing the amount of aqueous the eye produces. Laser treatment becomes an option if the drops prove ineffective.
According to the NHS, ‘you may need to try several types (of eye drops) before you find the one that works best for you. Sometimes you may need to use more than one type at a time.’ Consider the amount of time required both on the patients’ side and the prescribing medic, glaucoma can be a time consuming and costly disease. Requiring regular check-ups to monitor pressure and for those who are ineligible for free prescriptions, a financial burden too.
Trabeculoplasty is used most often to treat open-angle glaucoma. A laser beam is used to place a small hole in the iris (the coloured part of the eye) which allows the aqueous to drain more freely within the eye so the iris doesn’t plug up the trabecular meshwork.
This new form of treatment would reduce outpatient visits, if not eliminate them all together. Reducing the pressure on the hospital eye services and set to save the NHS up to £1.5m a year in direct treatment costs for newly diagnosed patients.

These results could fundamentally change how glaucoma is treated worldwide.