The National Institute for Health and Care Excellence (NICE) has recommended the use of Luxturna (voretigene neparvovec) on the NHS, Novartis has announced.

Intravitreal injection (IVI) of a therapeutic substance is the most common procedure performed in ophthalmology. The diseases treated with this method include diabetic macular oedema (DMO), retinal vein occlusions (RVO), anti-vegf for the treatment of wet macular degeneration and gene therapy for choroideremia. 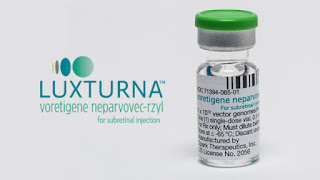 The drug is injected under the retina and carries a functioning RPE65 gene to act in place of the faulty one, and is recommended based on data from a Phase I clinical trial which found that the difference in mean change in binocular MLMT score between patients treated and the control group was 1.6.

In the gene therapy, a healthy copy of the gene is injected directly into the eye so a working protein can be produced. Patients have to have some functioning retinal cells for it to work.
Research has shown that, in the short term that the drug improves vision and prevents the condition from getting worse. The draft recommendations are now out for consideration by the company, healthcare professionals and patient groups. If there are no appeals, NICE expects to publish its final guidance next month. The treatment would then become available from January 2020. The voretigene neparvovec evaluation at NICE has taken 20 weeks instead of the average of 38 weeks within the Highly Specialised Technologies programme.

This treatment is only for the treatment of Leber congenital amaurosis type 2 (LCA2) and severe early-onset RP caused by mutations in a specific gene called RPE65.
Researchers are hopeful this could pave the way for similar treatments for dry age-related macular degeneration (AMD) to be made available on the NHS. Evidence from clinical trials shows that, in the short term, voretigene neparvovec improves vision and prevents the condition from getting worse. There is no long-term clinical evidence, but the committee considered it is biologically plausible that the treatment effect is likely to continue for decades.

The list price of voretigene neparvovec is £613,410 per patient. This technology breached the Budget Impact Test, meaning it would have cost the NHS more than £20 million in one of the first three years after being introduced. However, the company has a commercial arrangement with NHS England making the treatment available to the NHS at a discount, the size of which is commercial in confidence.